Although we love doing so, we can’t say that it’s always easy to watch football matches. The emotions, the excitement, and the fear of watching your team lose is something  you face every time you watch your team. However, when a match is finished, the first thing that pops in a football fan’s head is, “When am I going to feel that way again?”

Football documentaries and series provide another chance to experience those exhilarating moments again. They also give you so much more insight behind the action, making you feel closer than ever to your team and heroes.

Because we simply cannot get enough of the action, we decided to list some of the best football documentaries available on Netflix. We guarantee you that all these films will provide you with the same feelings of excitement!

What are the Top 5 Football Documentaries on Netflix?

Sunderland ‘Till I Die is a Netflix docuseries follows Sunderland AFC’s 2017-18 season – a year the team experienced many highs and lows in its history.

However, this emotional rollercoaster involved more than just the club’s players. The Sunderland fans always held their heart in their hands when their team played. Even though the supporters’ emotions were all over the place, not once did they doubt their love for the club.

In a small city like Sunderland, football is what moves its habitants. It’s an inspiring series about the love and the influence of Sunderland AFC has over its city.

First Team: Juventus is a story about the behind-the-scenes at the renowned Italian club. This series is a great documentary about the daily activities of Juventus’ players – in and out of the stadium.

It gives viewers a glimpse into the lives of players as they work to win the team’s seventh Coppa Italia. Juventus is the most successful club in Italy and many of the greatest football players in the world made their names at this amazing team.

In this documentary, you can expect interviews with current and former Juventus players. You also get to experience their way of living when they are not wearing the black and white striped t-shirt. Some particularly important moments are the episodes focusing on the team’s famous goalkeeper Gianluigi Buffon and defender Giorgio Chiellini.

It’s not easy to make a good football documentary. However, we’re happy to say First Team: Juventus gives the viewer a human look into the realities of playing for a team as established as Old Lady Turin.

It’s no surprise that one of the world’s best football players has a documentary. Ronaldo speaks about the behind-the-scenes life of Cristiano Ronaldo, the Portuguese sensation. It tells the story about how the young football player from Madeira flew to Lisbon to follow his dream: play football.

Now one of the best football players of the world, the five-time Ballon D’Or winner has a luxurious life, along with his children.

Even though he lives surrounded by his accomplishments, Ronaldo never forgets where he came from, nor his main goal. This documentary, which reports on two years of Ronaldo’s life, shows his origins and his path in football.

Curious to know more about this Portuguese star?

Antoine Griezmann: Champion Du Monde is a heart-warming documentary. It speaks about how Griezmann fought for his dream to be a football player, even though he was never lucky with clubs due to his physicality. The documentary lets you see how Antoine’s history led him to become the star that he is today. The film features friend and family testimonies and several interviews with Griezmann himself.

Although this is a biographical documentary, it gives its watchers a big life lesson. No matter the obstacle, you should never let anything get in the way of your dream. Never take no for an answer.

Looking for a football trip to watch Griezmann in action?

If you love the FIFA World Cup, this is the perfect documentary for you. Becoming Champ10ns is a series about previous World Cup winners, such as Italy, Germany, and Brazil.

Each episode reports on each team’s experience working to achieve the biggest prize in international football. Even though it’s a good series, the information given in each episode is a little general, which leads to some scenes being repetitive in multiple episodes.

Nonetheless, the episodes do their job and report each country’s trip to the top, and this gives the viewer some insight on the story. Each episode is between 40 minutes and an hour, making them fairly long. However, this doesn’t matter as it is an easy-to-watch series. 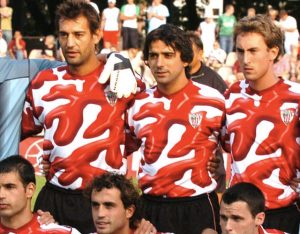 These are without question the most horrible football shirts of all time!